Because of its size and the distance between locations, the Southeast and South arms of Yellowstone Lake can feel very isolated. 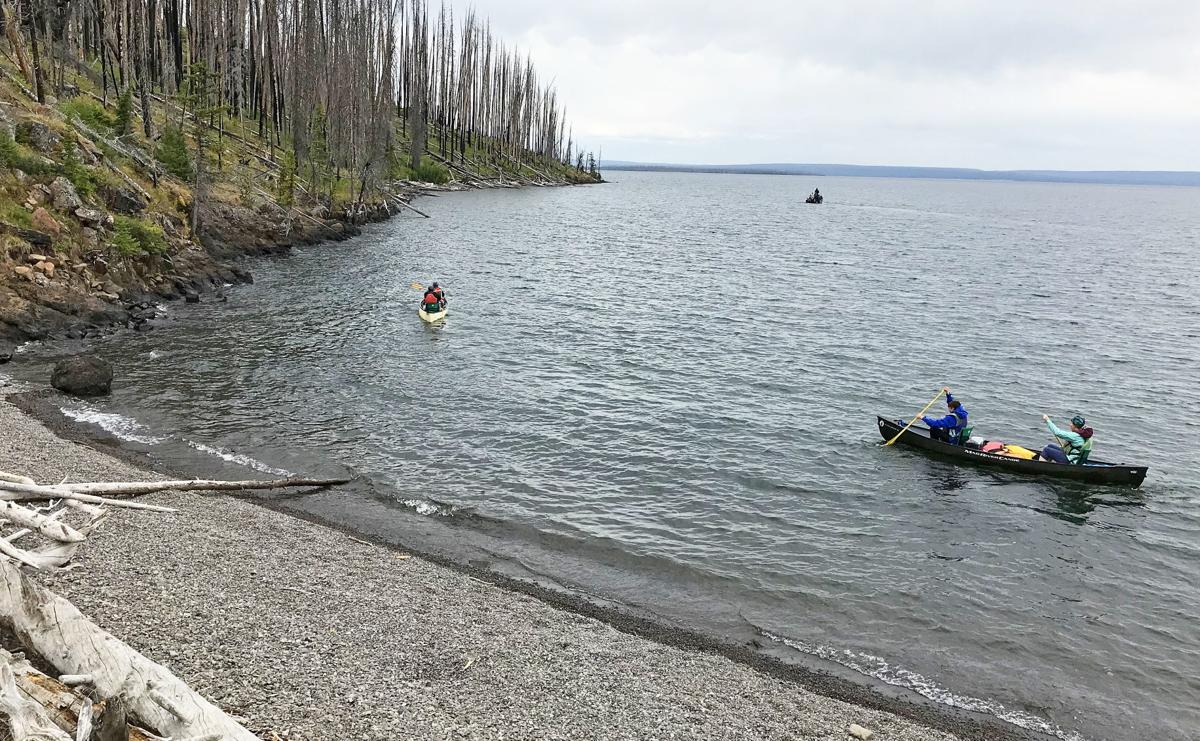 The Eisenstadt family paddles from The Promontory on Yellowstone Lake at the beginning of a six day journey around the South Arm of the large water body. 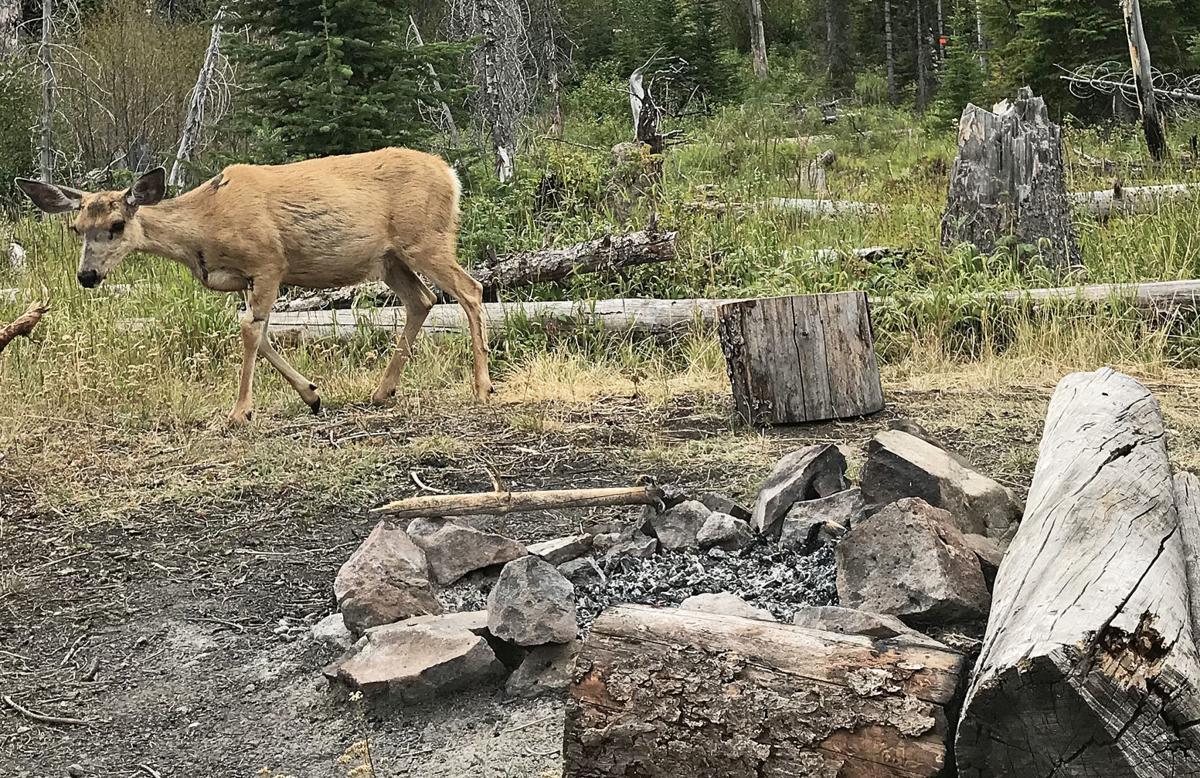 A mule deer doe wanders through a Yellowstone Lake campground. 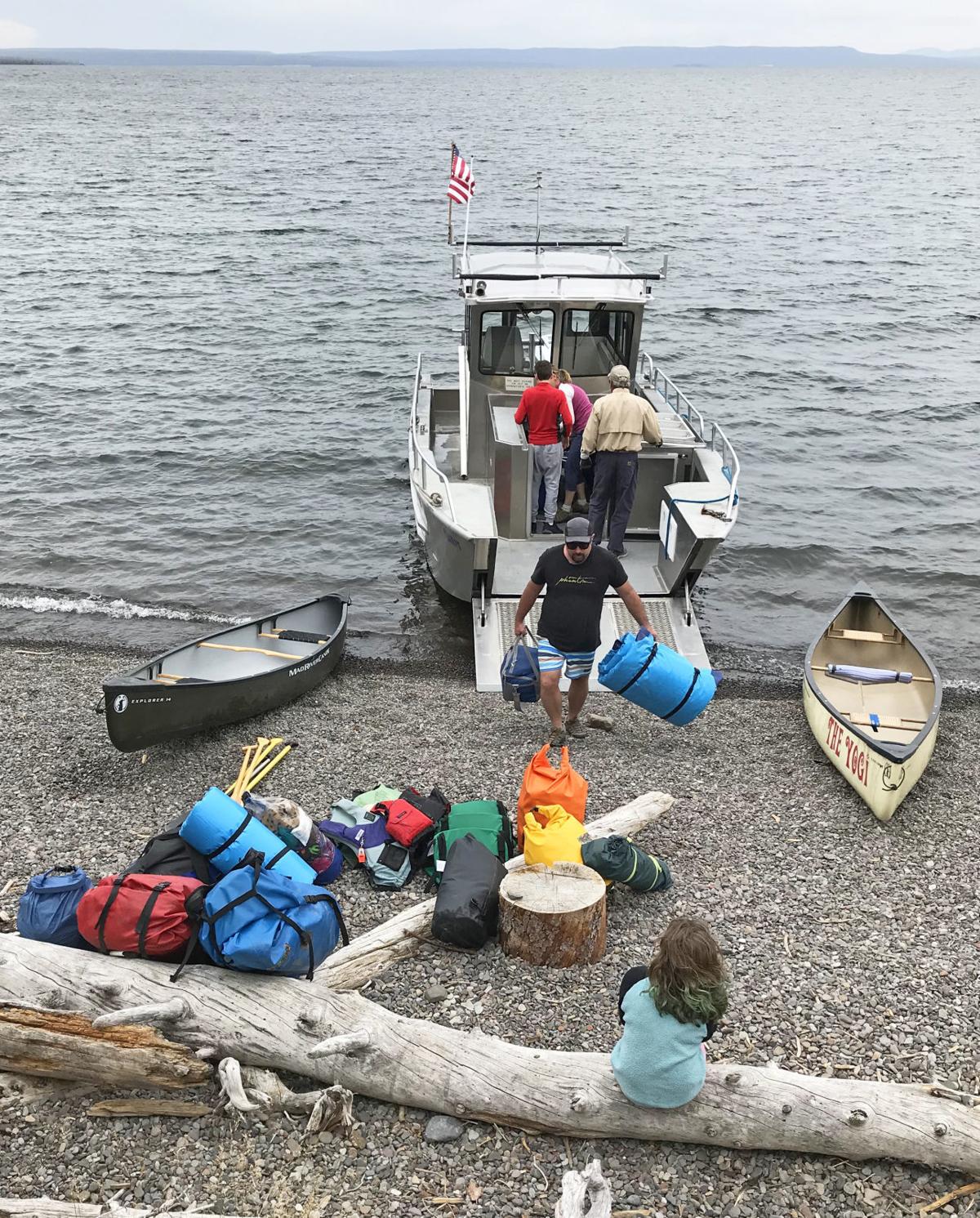 The Eisenstadt family unloads gear from a Yellowstone Lake shuttle boat as they are dropped off along a point between the South and Southeast arms of the lake. 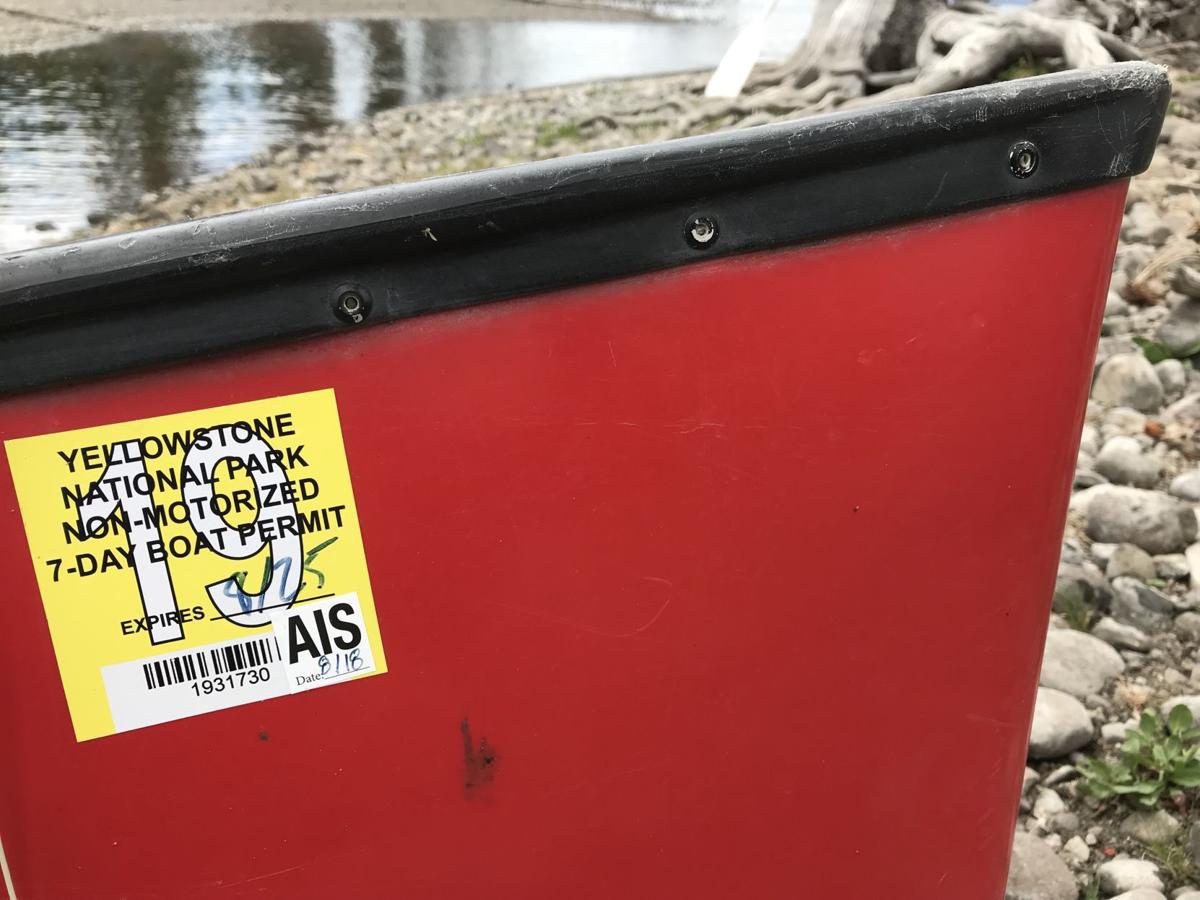 A permit is required to boat in Yellowstone National Park.

While thousands of summer tourists scramble daily around Yellowstone National Park’s roads to view wildlife and geothermal wonders, few will ever dip a paddle into the largest freshwater lake above 7,000 feet in North America.

So for those seeking a unique experience, boat camping on Yellowstone Lake can be surreal.

Over the course of six days in August, Missoula resident Keegan Eisenstadt, his wife, Kristy, and two children — Spencer, 13, and Holly, 10 — investigated the lake’s South Arm via canoes. The family heard wolves howl and bull elk bugle. The sand along one beach contained the footprints of a grizzly bear. Cranes and eagles provided aerial acrobatics along with “crazy Canada geese, the comedians of the avian world,” Eisenstadt said. Big mule deer came into one of their camps to curiously sniff the tents. And Spencer managed to catch one “huge” Yellowstone cutthroat trout, a native species that’s finally on the rebound after nearly winking out due to the illegal introduction of carnivorous lake trout decades ago.

“The only way to exist in that lake is to be very big,” Eisenstadt said.

After taking a shuttle boat to The Promontory — a large finger jutting into the southeast corner of the lake — the Eisenstadt family set out in a 14- and 16-foot canoe weighed down with camping gear and food. Each parent piloted a boat with a child up front. Spencer helped power his mother’s larger boat. For Keegan, Holly was in the bow.

“She’s little but mighty,” Eisenstadt said, although occasionally she would “engage the royal paddle” a petite stroke with no power.

Eisenstadt said the idea of taking his family on their first canoe camping trip was spurred by a friend’s tale, plus it would put the group in an area of the park they hadn’t explored. What’s more, he liked the notion of getting into the backcountry via a boat, which would save wear and tear on his injury-plagued knees.

During what Eisenstadt estimated was a 45-mile trip the family saw only six other boaters. At the end of the excursion, the concessionaire shuttle boat picked them up at Eagle Bay for the return to civilization.

“For nonmotorized trips on Yellowstone Lake we average between about 700 and 900 people a year,” said Ivan Kowski, Yellowstone’s backcountry supervisor.

That’s much less than the 1,200 to 1,400 people who prefer Yellowstone’s other iconic paddling destination, Shoshone Lake.

Even adding the two visitor numbers together reaches a sum that pales in comparison to the 4 million tourists who visit Yellowstone on an annual basis — the majority traveling in the summer. There are several reasons for the lack of paddlers, not the least of which that it’s a long way to get to the isolated Southeast and South arms of the lake.

There are two main water routes to the lake’s boat-in campsites. Although launching from the eastern shore at Sedge Bay shortens the distance to the remote Southeast Arm, Kowski said the route is less popular because it is more likely to be pounded by big waves fueled by winds out of the southwest.

Waves 4 to 5 feet high have the potential to capsize boaters into very cold water (40 to 50 degrees in mid-summer). Kowski said it’s not unusual to launch a rescue operation at least once a year to retrieve capsized boaters. Consequently, the Park Service advises paddlers to stay close to shore. That was the technique Eisenstadt’s family employed.

“Once we got to day three everyone was confident with the stability of the boat and team,” he said. “And we’d pull over if anything was weird.”

To avoid the waves, more boaters tend to launch from Grant Village and paddle eastward, the majority in sea kayaks. Two outfitters also provide overnight paddling trips to the region.

Those unwilling to stroke, stroke, stroke to reach the distant shores from either Grant Village or Sedge Bay can hire a shuttle boat for about $250 (one way) from concessionaire Xanterra Parks & Resorts, as the Eisenstadts did. The shuttle launches from Bridge Bay and is fairly popular, Kowski said.

Another reason self-propelled boaters may be scarce is they are required to have camping permits from Yellowstone National Park and are assigned sites. So paddlers must hit certain distances each day. Luckily, almost 40 boat-accessible campsites dot the southern end of the lake along a roughly 50-mile section of shoreline. The entire lake shoreline measures 110 miles — 136 square miles of unpredictable, temperamental fluid.

Kowski said campsite reservations rarely reach the allotted quota and visitation has remained fairly stable. For a nonrefundable $25 reservation fee boaters can apply by mail as early as April to book their preferred campsites. All of the information is online. Walk-in permits are also issued, but choice may be limited.

Possibly another explanation for why the Eisenstadts saw few other boaters was the additional challenge of camping in a region known for its grizzly and black bears. The southern end of the lake borders what could be considered Yellowstone’s wildest region — the Thorofare Valley.

To assist with preventing bear interactions campsites contain high poles — like the cross arm on a football goal — from which to hang, via rope, the campers’ food out of the critters’ reach. Metal bear boxes are also provided at some sites for hassle-free food storage.

As Xanterra warns in its literature handed out to park campers: “Failure to comply (with food storage rules) may result in property damage, injury or death of a person and/or the removal or death of a bear from the Yellowstone Ecosystem.”

Despite all of the park warnings and challenges of navigating such a large, high-mountain lake, taking his young brood on a six-day canoe trip on Yellowstone Lake was no big deal for Eisenstadt, although it was a great adventure.

“It was awesome,” Eisenstadt said.

“We raft all the time. So the aquatic environment wasn’t super strange.”

The family had so much fun they are already considering a similar backcountry canoe outing to Yellowstone’s Shoshone Lake next summer.

The backcountry permit to camp in Yellowstone costs $3 per night per person. So a five-nighter for two people is only $30.

A nonmotorized boat permit is required. The cost is $5 for seven days or $10 for the season.

The boating season begins the Saturday of Memorial Day weekend (usually the last weekend in May) and extends through the first Sunday in November.

The Central Backcountry Office staff can assist with trip planning and other questions at 307-344-2160.

This article originally ran on billingsgazette.com.

People across Montana can be assured that the state Clean Indoor Air Act will continue to be used to keep air healthy in buildings open to the public.

The state of Montana budgets about $9.8 million a year to operate and maintain its 55 state parks, which have an estimated $23 million in deferred maintenance needs.

I'm a girl who gets to dive deep into the latest and greatest cell phones and smartphones.

Welcome to the discussion.

Keep it Clean. Please avoid obscene, vulgar, lewd, racist or sexually-oriented language.
PLEASE TURN OFF YOUR CAPS LOCK.
Don't Threaten. Threats of harming another person will not be tolerated.
Be Truthful. Don't knowingly lie about anyone or anything.
Be Nice. No racism, sexism or any sort of -ism that is degrading to another person.
Be Proactive. Use the 'Report' link on each comment to let us know of abusive posts.
Share with Us. We'd love to hear eyewitness accounts, the history behind an article.

Get up-to-the-minute news sent straight to your device.